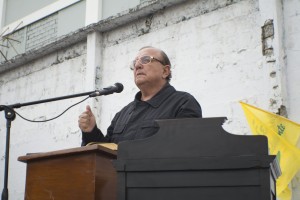 The Ecuadorian businessman Alvaro Noboa, launched the affiliation campaign for the political party Adelante Ecuatoriano Adelante, which would take the place of the former PRIAN.

At a press conference, Noboa released details of the political organization in formation. He raised the possibility of his participation in the upcoming elections. He said that if it´s the case, he will make alliances with other candidates or political groups, which as he revealed could be leftist parties.

During his speech, the Ecuadorian businessman presented some of his objectives, which are to attract investment to the country, generate economic resources, more modern education systems, decent housing projects, food basket at low cost, elimination of taxes, increase in production, health throughout the country and finally the union of the Americas.