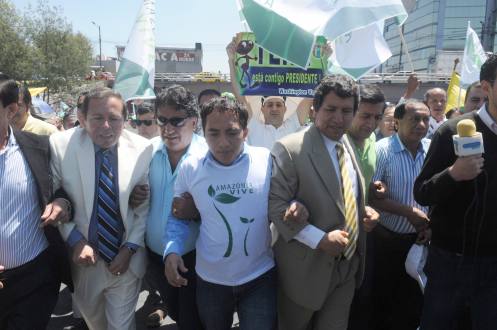 Yoffre Poma (mid) marches wearing an Amazonia Vive T-shirt, along with Amazon mayors in favor of the government’s proposition.

Yoffre Poma, leader of environmental group Amazonia Vive, which supports the responsible extractive activity of the ITT block in the Yasuni National Park, will delivere next Thursday near 1,200,000 support signatures to President Rafael Correa.

Originally, the signatures were collected for the National Electoral Council (CNE for its Spanish acronym) in order to request a referendum to support the government’s decision to exploit the Yasuni. However, once the contrary initiative from Yasunidos was disqualified, the Amazonia Vive group decided not to continue with the process.

The march scheduled for this Thursday is expected to count with the participation of students, members of the Rural Social Security, oil and electrical workers, who, according to Poma, want to demonstrate that the signatures do have popular support.

The concentration will begin in the traditional El Arbolito park in the northern center of Quito, around 09:00 am, to the Independence Square, where President Correa will wait for them.

Leopoldo Lopez will be tried by Venezuelan justice