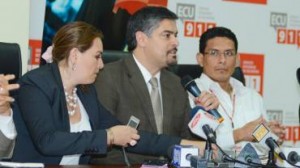 Yesterday, “Yellow journalism ” was the topic of discussion for members of the Regulatory Council of Communication ( Cordicom for its Spanish acronym ) and representatives of three comunication media, who gave suggestions.

The meeting was held at ECU- 911, in Samborondón, and it was convened under the dissemination (in various television media and social networks) of a video that shows the alleged murder of a taxi driver in Portoviejo, caught by the Ecu-911 camera system. The incident occurred two weeks ago.

Patricio Barriga, President of Cordicom, criticized the media who spread the video, which he described as “cruel and violent “

Although he said the agency can not prohibit the broadcasting of these images, adding that  the press should act on ethical communication principles and rules set out in the Communications Law

Paulina Mogrovejo, Cordicom member, said that the organization will act in case any person who feels affected by that videopresents the complaint to the Superintendent of Communication ( Supercom ) .

Ecuador will donate $ 1 million to the Inter-American Court