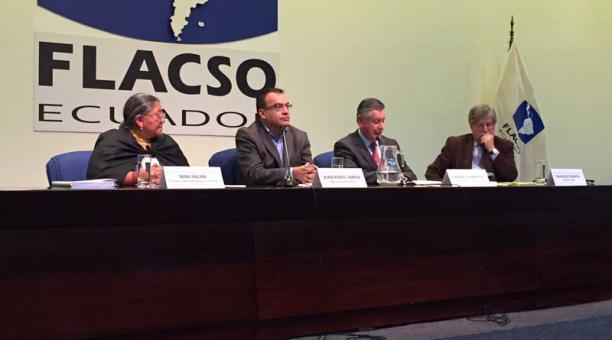 The Ecuadorian ambassador in Washington, Francisco Carrión, returned to Quito. He recently met with the president of the United States, Donald Trump, to present his credentials; yesterday in the Flacso presented his last academic work: ‘Ecuador: between insertion and isolation’.

It is a work that analyzes what foreign policy has been since the signing of Peace with Peru, in 1998 until 2015. The former Ecuadorian Chancellor, Nina Pacari, the rector of Universal Central, Fernando Sempértegui, the director of Flacso, Juan Ponce, and the author himself intervened.

Pacari was surprised to begin her speech in Kichwa. She then clarified that, in summary, she said that the book was important to refresh the memory of a country that has individual and collective amnesia. Pacari highlighted how current international relations show the power of international organizations that “break with the jurist concept but increasingly away from reality: sovereignty.”

And with this there is a third actor that can have more weight than states not only in development but also developed: “General Motors exceeds the GDP of Denmark”, exemplified  Sempértegui, on the other hand, made an extensive critical summary of Carrión’s work.

He pointed out that Ecuador, due to the instability until 2007, did not have a foreign policy, and then, with the correísta decade, to have an ideologized diplomacy. This produced, especially since 2011, that there was no necessary commercial development with neighboring countries, for example. Carrión did not want to talk much. “What I think is in the book,” he said.