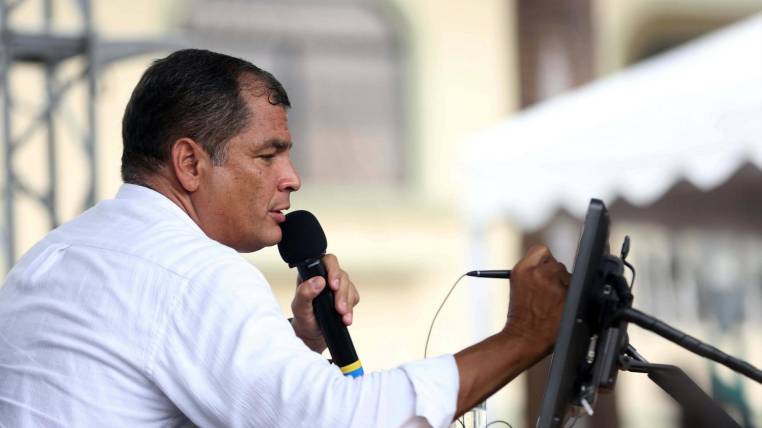 It is an approximation to the spending that the Government of Rafael Correa made for Citizen Links or “sabatinas”. Between June 1, 2013 and May 24, 2017, 6.7 million dollars were allocated for the assembly of these spaces. But it is a partial account: there is not counted, for example, the payment of per diem or the mobilization of officials who every Saturday moved to different parts of the country and abroad.

And it is the amount that was audited by the Comptroller. The report, approved on February 16, estimated at $ 42,371.87 the cost of each link that was transmitted in those years. Expenditure is triggered abroad.

During this period, the Communication Secretariat (led by Fernando Alvarado) organized four links in the United States, Madrid and Italy. It allocated 1.3 million dollars that were paid through the Ministry of Foreign Affairs and the consulates. In New York, on April 12, 2014, the Secom relied on an ‘old acquaintance’: the McSquared Pr. Inc. company that received a transfer of $ 650,000.

What is the problem? There is no documentation that explains how costs and budget were defined, nor the requirements and technical specifications. In the end, the payments were not justified either. McSquared is, according to press reports, a public relations firm based in Brooklyn that was in charge of hiring the artists who participated in the government campaign “The dirty hand of Chevron.” Its owner is María del Carmen Garay. According to the report sent to the Comptroller’s Office, most of the money in the US was destined to the payment of the mobile unit, satellite, stage, tents or chairs ($ 393,602.68) as well as informative and documentary pieces ($ 135,900) although there is no proof of that.

Precisely, the production of the videos that were transmitted on the links is another of the items that caught the attention of the auditors. Each piece, including the so-called ‘cantinfladas’, cost $ 866.25, on average.

In 2014, the Secom hired Francisco Gabriel Paredes Flores for the production of 56 videos. He canceled $ 41,570 although, finally, he did not use eleven of them that cost him 7,796 dollars. There was not transmitted, for example, a response that was prepared against the mayor of Guayaquil, Jaime Nebot, on the Territorial Organization Code, in December 2014.

After his relationship with the Secom, Paredes Flores does not register any more contracts and applied, at least, to eight public competitions to get a job. Spending abroad and videos were two of the seven irregularities found by the Comptroller’s Office. The entity believes that Alvarado was responsible “for not having issued provisions for compliance with the regulations.”

In all his replies, sent on January 18, the former official explained that he “delegated” powers to other officials at the hierarchical level. For this reason, the report also mentions the former national secretary, Pablo Yánez; or the ex-sub-secretaries of Institutional Media, Marco Bravo and Patricio Pacheco.

Prosecutor’s office appointment Alvarado brothers The brothers Vinicio and Fernando Alvarado, ex-secretaries and ministers of Rafael Correa will have to go tomorrow to the Office of the Prosecutor. They are investigated for evidence of criminal responsibility established by the Comptroller’s Office and a report by the Financial and Economic Analysis Unit (UAFE).

Prosecutor Carlos Baca said they are scheduled for tomorrow. According to the UAFE they registered millionaire movements in their accounts while they exerted the positions of Secretaries of the Administration and of Communication and ministers of Tourism. In addition, they are investigated for irregularities in the hiring for the transmission of the sabatinas. Baca said that the investigations continue within the urgency that the subject requires.

One person (not identified in the report) was awarded a contract for 1.1 million for the assembly of the links. Then he charged $ 62 for transportation without justification and received a supplementary contract for $ 269,768.

The Secretariat of Communication of the presidency disbursed 122,287.64 dollars in processes denominated of ‘very small amount’. This expense was not supported by previous studies that support their specifications, destinations, purpose or scope.

The Comptroller’s report contains the contract with an audiovisual technician for $ 12,000 and a consultancy for $ 52,000 whose irregularities can lead to a criminal offense, as EXPRESO said last Wednesday. (I)