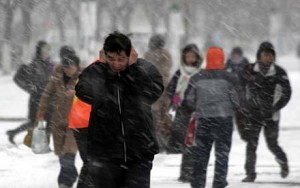 Strong winds and temperatures below zero affected every corner of Europe. In Poland, United Kingdom and Switzerland, 26 people perished because of the weather and traffic accidents.

In London, the Gatwick airport was paralyzed due to the snow on the landing lanes. The Edinburgh airport of Scotland and the Lyon-Bron in France were also shut down because of the extreme weather. In Poland, police authorities informed that eleven homeless people died because they didn’t obeyed the warnings, the cold quickly went below 20 Celsius degrees and in some areas like Bialystok a new cold record of 26,5 degrees below zero was registered.

In the German roads the weather caused over 2,000 car accidents, on Austria a man of 69 years was frozen to death when he fell unconscious below a bridge, he was walking home. The United Kingdom hasn’t seen so much snow since 1993, which causes delays on the roads and railroads. The gas and energy prices have rose due to excessive need.

In Spain, December started with a bad weather, the threat of strong winds, rain, and snow threat the entire nation. The only exception is the Mediterranean island of Cyprus a heat wave has caused the driest weather since November.