Antonio Noboa is concerned about Barcelona 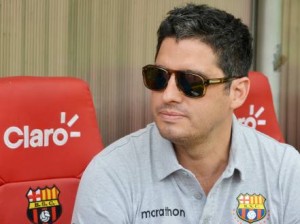 The president of Barcelona Sporting Club Antonio Noboa talked about the difficult situation of the team. Barcelona is on the sixth position of the National Championship, a situation that concerns Noboa due to factors such as deconcentrationsand, and the match of Monday, 13 April, where they lost against Chullas. Noboa considers that Roddy Zambrano took a stance against Barcelona compared to other arbitrations, and only sought the limelight when whistled for Barcelona.

On the work of coach Ruben Israel, he said it shows a lot of concentration and character, and the contract renewal of Israel will be analyzed. In addition, he indicated he has never thought about changing coaches, and highlighted that the important thing is to seek stability in the team.

“Sometimes we can not be satisfied because we always want more; being better or perfect. The team has yet to find the right way and the staff must seek to recover,” Noboa said about the performance of the yellow team.

The latest results do not disappoint him as president of the club. “I am calm. This leadership has been serious, it directed the club in an appropriate manner; perfect directives does not exist. However, a bad result always hits us a little, but we carry on,” said the manager.

Finally, he confessed that many surprises are being prepared for the 90 anniversary of club (May 1), like a match against an European team, whose name was not disclosed.