Antonio Ricaurte was assaulted outside the courthouse 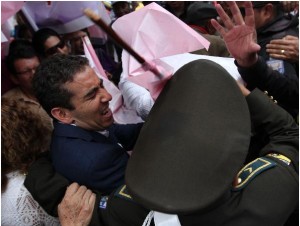 Out Ricaurte. Coward. Traitor. These were the shouts of Carla Cevallos´ supporters, who is the Capital Councillor of the Sums-Vive party, while his colleague Antonio Ricaurte left the court in Quito.

He left the judiciary in the midst of miscues, shouts and whistles. He did not give statements. Ricaurte had attended the ongoing trial against him for alleged dishonor and disrepute, offenses for which he could be imprisoned between 15 and 30 days.

He tried to to pass through the the group. Within seconds he was surrounded by supporters of his colleague who made claims. Then he was beat with a baton and a received a punch from one of the women that was protesting.

Cevallos rejected the aggression but justified it by saying: “I suppose that the gentleman is exposed to the reaction of Quito, that´s why he reveives those answers. I reject any act of violence.”