Last Thursday about 50 Assemblymen of Alianza PAIS (AP), led by the president of the National Assembly Gabriela Rivadeneira, walked three blocks from the Legislative Palace to the Constitutional Court (CC) to submit the draft amendments on the Magna Carta.

The constitutional judge, Manuel Viteri, received Rivadeneira, who asked the agency to make the analysis on a “fast” manner, explaining that she did not want to interfere with their duties.

On his behalf, Viteri said that the Court shall solve the issue “in the shortest possible time, as it has done in other cases,” and with transparency and seriousness.

The CC has 45 days to issue a procedure decision on AP’s proposal, as defined in Articles 441, with an amendment; or 442, with a reform. Viteri did not mention Article 444, which speaks of a Constituent Assembly. 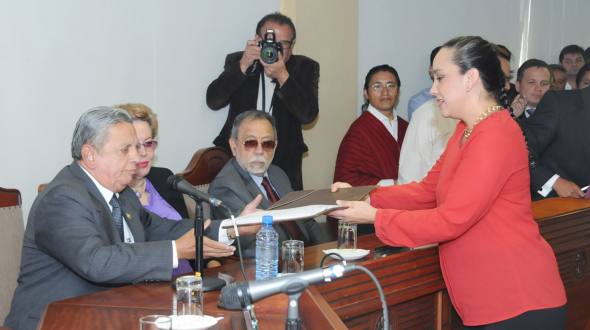 Gabriela Rivadeneira (r) delivers the amendment proposal to Manuel Viteri of the CC.

Ecuador monetary sector could be reordered by law