AP insists on reforms to the role of the Comptroller 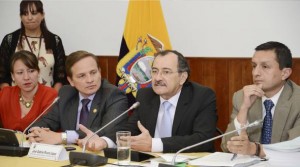 Pólit filed a letter to the CC, indicating that “limiting the powers of the Comptroller General of State threatens the transparent use of resources that belong to all Ecuadorians”.

Against this, Virgilio Hernández (AP) noted that for some autonomous governments (GAD) the Comptroller’s Office attempts to make an assessment of the management (meeting goals) has meant an intrusion “that has often been detrimental to the interests of the citizenship”.

María José Carrión (AP) said: “We have to see which is the resolution of the Court. It would be important to discuss this and welcome the comptroller in a general committee”.

The assemblymen of the ruling party expect the maximum response of the Court to be given until early November, to meet the deadlines of the Constitution and thus process the draft amendments.