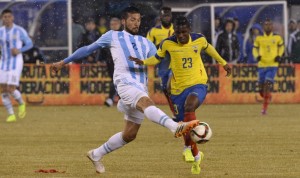 Argentina beat Ecuador 2-1 this Wednesday in the last friendly match played in the American football tour at the Metlife Stadium. Sergio Aguero and Javier Pastore scored the goals of victory, the first one with a header at minute 7 and the second on in the 58th minute after receiving a pass from Lucas Biglias.

The goal of the Ecuadorian team was scored by Miler Bolaños in the 24th minute, thanks to a strong pass from captain Walter Ayoví. The great absentee in the match was the Argentine soccer star Lionel Messi, who could not play because of a discomfort in his right foot. Both teams are preparing for their participation in the Copa America Chile 2015.

2-0 was the defeat of Aucas against Barcelona