Argentina President seeks jurisdiction for the payment of debt 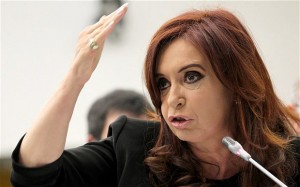 President Cristina Fernandez announced on August 19 that she will send to the Congress a draft law to put under the jurisdiction of Argentina all the sovereign debt titles, and thus circumvent the blockade of funds that the United States justice imposed to the South American country in a litigation with investors who claim $ 1,500 million.

The initiative, announced in a weekly address to the citizens, declares of “public interest” the restructuring of Argentina’s sovereign debt in 2005 and 2010, in default since 2001.

She also establishes “legal instruments that allow the collection of the corresponding services to one hundred percent of the securities issued” in such transactions.