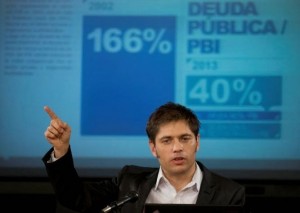 The Argentine Congress began yesterday to discuss the draft Sovereign Payment Act, which proposes the Central Bank as fiduciary agent for creditors to collect their debts in Buenos Aires, rather than in New York.

Economy Minister Axel Kicillof urged the Congress to support the official project he promotes, because he claimed they can disrupt this way  a “political plan,” with which Americans investors seek to sink Argentina.

Kicillof said that “if the Congress does nothing, he ratifies Thomas Griesa judge’s ruling,” who ordered the payment of maturities for 540 million dollars that the Argentine government made on June 26 to bondholders.

The initiative aims to replace the Bank of New York Mellon (BONY) as fiduciary agent for the payment of the bondholders maturities that in 2005 and 2010 entered to swaps of the declared defaulted debt for more than a decade .

“They can not sovereignly prevent us to pay. We want to pay and we will do, we can’t do it in the Bank of New York, we are going to do it here,” insisted Kicillof.