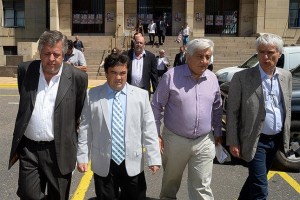 Prosecutors from the Argentine Justice called for a silent march on February 18, because of the compliance of one month after the death of the prosecutor Alberto Nisman.

The prosecutor Carlos Stornelli invited citizens to march on February 18: “Let the silence mean the peace we need,” he said.

Stornelli warned: “The macabre death must mobilize to an awareness that Nisman was the first case but might not be the last.”

The prosecutor Guillermo Marijuan confirmed that the march that will take place in the south of Buenos Aires-from the Congress to Plaza de Mayo where the House of Government is located- will be a tribute to the prosecutor´s death.

“It is not a march against no one,” said Marijuan after asking the audience to bring “only Argentine flags”.

The cause that is being investigated by the prosecutor Viviana Fein is qualified as “suspicious death” and among the possibilities re mentioned suicide, induced suicide or murder.