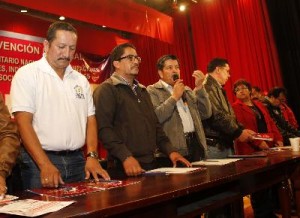 Glenda Soriano, leader of the National Union of Teachers of Guayas (UNE), announced they will hold a march onFebruary 19 to reject the output of their peers. According to Soriano, the budget announced by the Government (1,420million forthis year) will be felt in the non-renewal of teachers contracts.

The route and participants of the demonstration will be hold on February 11, but Soriano said that the affected would be about 500.

Another claim of the organization refers to the creation of the Network of Educators, supporters of the government of President Rafael Correa. For the UNE, the group aims to divide the sector. Teachers also protest for the possible rise of passages and wages agreed in December.