Arrests and assaults in protests are analyzed by two fronts 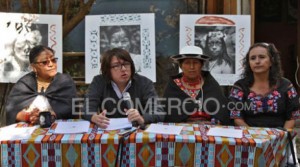 A study conducted to civil society analyzed the protests of indigenous and social associations against the government, recorded this month, where the results speak of rights violations, assaults and even psychological damages to the protesters.

The findings were submitted in a preliminary report “on state strategies for social control and repression in the context of the national strike”. This was developed by the Research Psychosocial Action organization, composed by, according to Julian Martinez, volunteer researchers, activists and academics linked to the defense of human rights and of nature from the psychosocial field.

The presentation was made in the presence of two indigenous women leaders: Nina Pacari, a constitutional lawyer and Carmen Lozano, director of women of the Ecuarunari. The document states that between 13 and 23 August this year 142 people were arrested. Although they acknowledged that this figure does not match the one of the prosecution, information that the group amounted to 123 (until August 19).