Assange and Correa, on Lenin Moreno’s agenda on his trip to Europe 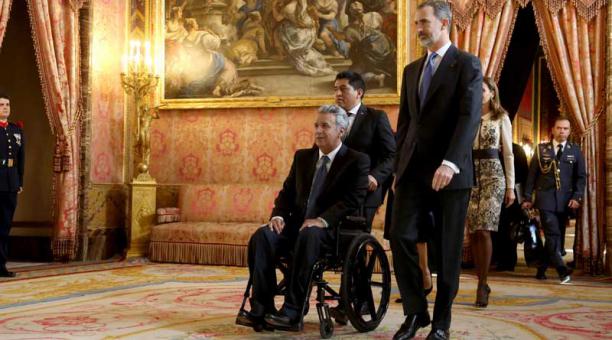 President Lenin Moreno is preparing his eighth official international trip since he was installed in May 2017. The President will be between July 22 and 28 in Europe. No details of the agenda have been disclosed, but it is known that he will visit the United Kingdom and Spain.

The first destination will be the British territory, but it will not be an official view. On July 24, Moreno plans to give a talk at an event of the Alliance of People with Disabilities, in London. His trip opens a door to close the conversations about the situation of Julian Assange, asylum in the Ecuadorian Embassy in London since June 19, 2012.

On Monday, July 16, 2018, the British newspaper The Guardian revealed that these dialogues are being performed “at a high level in an attempt to remove Assange from the Embassy of London”. Even the report points out that Alan Duncan, the British Foreign Minister, “is involved in the diplomatic effort” to solve the case from the weeks prior to Moreno’s visit.

Assange was in 2010 in the United Kingdom when the Swedish justice requested his extradition for a sexual crime, so he had to appear before a British judge. Upon entering the Embassy of Ecuador stopped reporting to the judge, which is a crime in that country.

Although Sweden put aside the charges, Assange could be captured for this violation in London and it is feared that he may be extradited to the US, a country that also requires disclosure of classified information through the Wikileaks portal.

Adrián Bonilla, a teacher of Foreign Affairs in Flacso, clarifies that a refugee cannot be thrown out when there is the assumption of one of the parties of a possible violation of human rights. The ‘hacker’ hopes that a possible extradition to the United States will not be executed. In this scenario, what corresponds, according to Bonilla, is that the causes that led to the refuge of Assange disappear. That is to say, the ‘hacker’ must feel that the US he does not want to attempt against him.

He adds that, for this reason, the dialogues should not be made only with the United Kingdom but also with the United States. Moreno met with the vice president of that country, Mike Pence at the end of June, but none confirmed that the Assange issue was addressed.

Another issue on the agenda is to reposition the image of Ecuador abroad. In recent weeks, former President Rafael Correa has tried to position a discourse on a political persecution in international media. In a radio interview, Andrés Michelena, Secretary of Communication, indicated that a team has been formed to reverse this speech. It is headed by Foreign Minister José Valencia and is accompanied by the diplomatic corps, mainly in European embassies. “The President himself will be in Europe,” he said of Moreno’s participation in this strategy.

The second stop will be Spain. The President is scheduled to meet with President Pedro Sánchez. Despite this appointment, the trip to Spain is not cataloged as official. This will be Moreno’s second visit to Europe.

In December of 2017 he was in Italy, the Holy See and Spain. On that occasion, he met with former President Mariano Rajoy. The visit, this time, takes place in a different ideological environment. Rajoy is identified with the Popular Party (PP), self-styled right. While Sanchez is the general secretary of the Spanish Socialist Workers Party (PSOE), center-left. It is the opportunity for Moreno to join allies of his tendency in Europe, since another faction of the Spanish left supports Correa.

Last week, the Podemos party – led by Pablo Iglesias – assured that the international arrest warrant against Correa (for the Balda case) is part of the judicialization of the policy.

Carlos Estarellas, former Secretary of Foreign Affairs, explains that although these conjunctural issues can be discussed, a presidential trip must be planned. He adds that while it is important to clarify in Europe that the Balda case is not a political persecution but a judicial decision, it is also important to address more important issues of the country related, for example, to the large number of Ecuadorian migrants in Spain and to take up the dialogues for the elimination of the Schengen visa for the entrance of Ecuadorian tourists to Europe.

The official travel agenda will be made public during this week. Although it is known that agreements related to security and social issues will be signed. This will be Moreno’s second international visit with his own agenda. The other six trips were made by the UN, two Binational Cabinets, two presidential possessions and the Summit of the Americas.

It also remains to be confirmed how many and which officials will accompany the President. In the first European tour he had a delegation of eight officials and his wife. Among the ministers were ex-chancellor María Fernanda Espinosa and the  head of Comercio Exterior. (Foreign Comerce). (I)