Assembly approves exemption of driving test to get the license 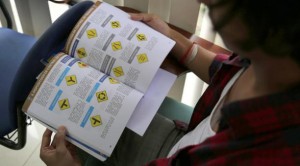 The National Assembly approved on second debate the draft reforms to the Law on Land Transport, Traffic and Road Safety, which has, among other purposes, to ensure the training and updating of knowledge for drivers, as a mechanism to prevent insecurity on roads.

Among the achieved reforms is the unprofessional driver’s licence Type B, where the National Transit Agency (ANT for its Spanish acronym) will only require the approval of psycho-metric, theoretical and proactive tests taken by the entity itself and taking courses in driving schools will not be mandatory.

In case of failing, the applicant shall obtain the certificate of SECAP or schools duly authorized by the ANT. The driver that has not been sanctioned by at least a year since the last posted infringement, will enjoy two extra points , which will be increased automatically to the driving license for the next year.

Immigration measures announced by Obama are demanded by 17 states