Assembly introduces a new style for Christmas in Ecuador 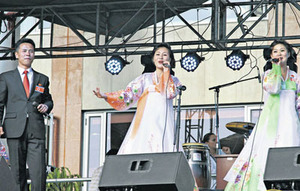 Last Tuesday, the president of the National Assembly, Gabriela Rivadeneira introduced the policy of “an Assembly of open doors.” This time the guests were the youth and the idea of ​​giving a “non-commercial” Christmas meaning, according to the organizers of the event in the main courtyard of the building.

This appointment was called Cultural Day Dreams and Utopias. In reality it was a paper balloon contest, in which participants had to leave a message regarding the future of the country.

Around 100 groups joined to form part of the contest, but most gathered around the stage to listen to music groups invited as La Banda del Viejo, Monkey Roots, Papa Chango, Kracyl, Hormigas-Negras and three choirs.

In the afternoon, hundreds of youths arrived form the XVIII World Festival of Youth and Students, held at Bicentennial Park. Also Spaniards, Cuban, Western Sahara, Nordic arrived, but what drew more attention were those of the North Korean delegation, who sang a theme in its original language. But the audience was shocked when the first choirs of ‘Chulla Quiteño’ were heard. It was sung in both languages​​, Korean and Spanish.

Ecuador seeks extension of maritime rights up to 350 miles