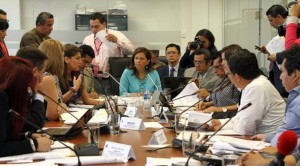 Today is expected to be completed the second debate in the Assembly on the draft pension funds. After that, it is expected that the rapporteur Betty Carrillo (AP) decides to accept or not the remarks made in plenary, to then proceed with the voting. The session would begin at 10:45, today.

“We hope we can finish the second debate (…), the intention and the call so tomorrow we could vote on the project,” said Kerlly Torres, assemblywoman for the ruling party.

Carrillo clarified that the money of the partakers will not become part of the Bank of the Ecuadorian Institute of Social Security (Biess for its Spanish acronym).

Torres also said that the project involves the presence of an inspector for each of the 54 funds, as well as a temporary administrator until the transfer to the Biess is done, after 180 days.