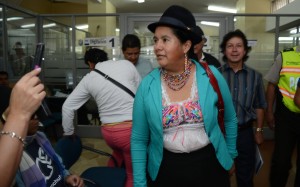 The assemblywoman of Pachakutik, Lourdes Tibán, pointed out President Rafael Correa as the responsible for the physical and verbal aggression she suffered Wednesday morning a few meters from her office in the  Carlos Ibarra and 10 de Agosto streets, in north central Quito.

“The one responsible of wanting to intimidate me with his punches, with his hitmen, his henchmen is Rafael Correa Delgado and I will not shut up, I think that if the people has chosen me as Assemblyman is to expose the corruption and to denounce what today I can not do in the Assembly so I blame the national government of what might happen to me,” said the legislator after a medical checkup at the Judicial Police, where she filed a complaint.

Tiban said that when leaving her car she turned around and two women assaulted her. They dragged her by the hair, she was threatened with death and they told her: “you do not know what will happen to you, do not know who you’ve messed with”; “I crossed the street because they were following me and a tall man insulted me, told me to take care of myself, he said that something was going to happen to me, he called me scoundrel and other words I can not repeat.”