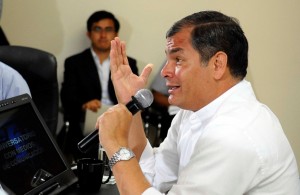 “It has spoken several times about the Ecuadorian miracle, I always said that miracles do not exist in economics and developing: there are consistently good decisions and adequate economic policies,” said President Rafael Correa at a round table last Tuesday in Guayaquil.

However, after “the collapse in oil prices” (that in August would be in the order of $ 35.79 according to the National Information System), the appreciation of the dollar and the lack of national currency to devalue it he said “we can not do miracles before tremendous external shock.”

These statements contradict what he said on his return from a tour in Europe in November 2013. When he assured that there are people who are very aware of what is happening in Ecuador, about he socialism of the XXI century, the new ideas emerging from Latin America; of seeing the stagnation of Europe “while countries like Ecuador grow, reduce poverty, reduce inequality. Then the Ecuadorian model is even known as the Ecuadorian miracle.”

In the last speech of the president in front of the national press he explained that by falling oil prices, Ecuador will no longer receive about $ 7000 million and confirmed that “we will not probably grow this year, but we will decrease.”