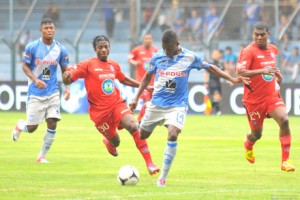 The Association of Soccer Players of Ecuador  (AFE) confirmed the suspension of the Ecuadorian soccer championship, this was announced yesterday at a press conference.

“From today we have decided to paralyze our activities. We will not allow that the Ecuadorian Soccer Federation tramples our rights,” said Edwin Tenorio, vice president of the union.

Meanwhile, the president of the AFE, Ivan Hurtado, said today they give way to the strike “in order to see what will be the ruling of the Ecuadorian soccer’s governing body.”

“We will not allow so much abuse, so many lies, we hope that this lack of respect and lack of ethics is finished,” he said. And finally he said: “The strike of Ecuadorian the soccer players is a fact. ”

The suspension of the Ecuadorian championship will not be resumed until the problem of the clubs that owe several months of payment to players is resolved.

The communication, from right to a public service