Attorney General admitted that a Panamanian company owns his home 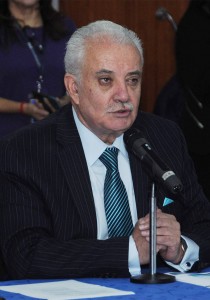 Attorney General Galo Chiriboga explained yesterday how he acquired a house located in the exclusive area of La Vina, in Cumbaya, northeast of Quito, in 1999, and why this property is in the name of the Panamanian offshore Madrigal Finance Corp., which is owned by him.

These operations, which were already public in Ecuador, gained relevance last week after the publication of the papers Panama Papers week, a leakage unvelied by the International Consortium of Investigative Journalists (ICIJ) on the Panamanian law firm Mossack Fonseca, with expertise in offshore operations.

In Ecuavisa, Chiriboga said that it all started with an investment of $ 80,000 he made in the Bank of Agricultural and Livestock Credit that, due the financial crisis of 1999, could not be claimed. He noted that, to honor this debt, the bank gave him the charging of a promissory note amounting to 220,946 million sucres, that a German couple owed to the bank.

The Attorney stressed that these 220 million represented, at that time, just $ 39 thousand dollars.

He said that a judge ordered that the debt is collected through the house. The purchase agreement among the Germans and Madrigal was made for less than $ 2,800, at the official exchange rate of that time.

Negotiations between Ecuador and El Salvador began to reach an agreement