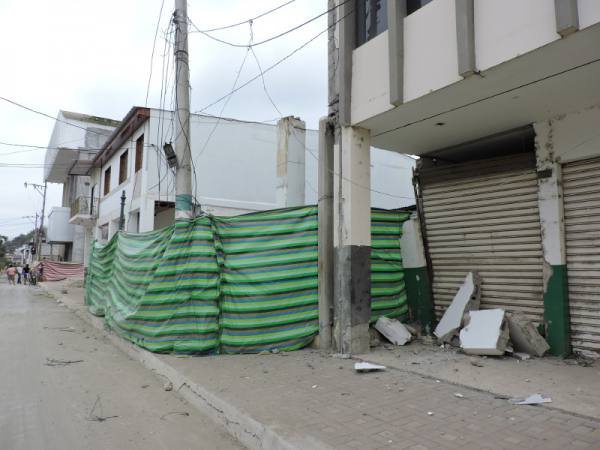 The earthquake recorded at 06:19 yesterday with magnitude 6 on the Richter scale, with epicenter in the San Vicente canton, startled the manabitas again.

Damage to masonry, fissures, electricity cuts, in some cases for six hours, suspension of classes, were affectations left by the earthquake.

But authorities in Manabí remain on alert mainly for a point that on April 16, 2016, the day of the earthquake that struck Manabí, triggered a geological fault: The “Reencuentro” of the San Isidro parish, in the canton of Sucre.

Governor Fabricio Díaz made a flyby in the area, while representatives of the Secretariat of Risk Management (SGR) went to the point to learn more details from residents, who with the earthquake yesterday left and did not return to their homes. households.

Johan Loor, zone coordinator 4 of the SGR, said that inhabitants have told them that they had heard explosions since last Saturday and this added to minor earthquakes

The existence of cracks has not been confirmed. Loor said that inhabitants have already supposedly heard the roar of the subsoil and that even the SGR passed a report and that Minister Alexandra Ocles had already asked for a team from the Geophysical Institute to travel there to do studies.

In San Vicente, Carmen Vélez said she felt the quake not only as the earthquake of April 16, but as on August 4, 1998, which also hit the Manabitas population.

The Bahía de Caráquez Museum presented cracks. “The first evaluation after the damage (…) shows damage to the external masonry,” the Minister of Culture and Heritage, Raúl Pérez Torres, wrote on Twitter.

In Bahía de Caráquez, exteriors of structures were repaired; others remained flimsy. There were traces of masonry on the floor. Manuel Muñoz, custodian of a house in av. Bolivar said that he had to get safe and that he observed pieces of blocks of nearby structures fall heavily to the ground.

“Those blocks were already quartered, but with the tremor of today (yesterday) they fell definitively. If someone passed by, it would’ve killed them, “he speculated.

Vladir Villagrán, president of the Association of Hoteliers of Bahia, said colleagues did not report structural damage. “Basically there was masonry damage, cracked walls, but there were no major problems,” he said.

The taxi driver David Loor washed his car in the parish Leonidas Plaza, Sucre, when he observed “how the earth jumped”. The lack of electricity caused that some food sales, cybers, fabrics and stores did not open their doors in Bahía de Caráquez.

The distributor Pepe did receive clients. Its administrator Agustín Alcívar said that they issued invoices by hand. The fluid returned past noon. Tosagua suspended its fair on Sundays. In addition there was restriction of drinking water due to breakdowns in La Estancilla station, according to the manager Leonardo Zambrano.

At the Solca hospital in Portoviejo, sheets of ceiling were dropped from an unoccupied area. According to Eduardo Carrillo, a communicator at the hospital, there were no people injured. In Chone, Roque Zambrano, 77, of the El Paraíso neighborhood, said that for security he will sleep again in the streets. Óscar Castro knelt by his wife and they prayed together (I)

Santos, the Odebrecht informer, says that Carlos Polit was “the fourth power”