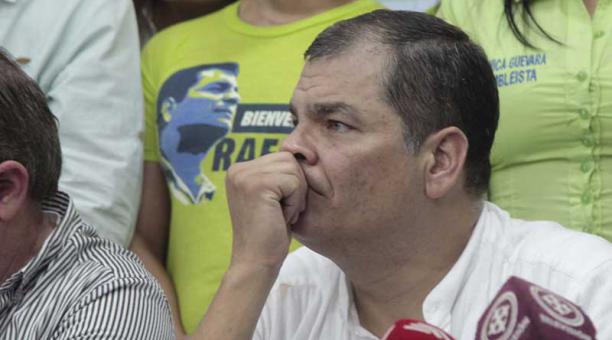 Former President Rafael Correa has been six days in the country. He has fulfilled a tight schedule since his return, the morning of November 25, 2017. During this time he has given interviews to the media and has met with executives, legislators and hundreds of supporters of “Alianza País”, in several provinces.

The visit takes place in the midst of a crisis of the pro-government movement, which confronts those who have been critical of the Correa administration (and have sided with current President Lenin Moreno) and those who cling to the leadership and management of the former president.
One of the factions warned that the arrival of Correa had as strategic objectives to regroup the movement around his figure, lead a convention in Esmeraldas and stop the popular consultation proposed by President Lenin Moreno.

However, four days after he returns to Belgium, where he resides since July with his family; when he left the mandate, he has added more stumbling blocks than successes. Correa himself acknowledged that his return would involve political risks.

Former President Correa arrived at dawn on Saturday, November 25, 2017 at the Guayaquil air terminal. At first, it was announced that he was going to give his first statements at 01:30, on the international arrival exteriors. However, the planning was altered by the presence of detractors of Fuerza Ecuador, of Abdalá Bucaram, who clashed with supporters of Alianza País. The former president had to leave by an access of a private terminal of the airport; without speeches and in a vehicle with tinted windows.

2.- Suspension of the TCE session by Alianza País

On November 27, three judges challenged the head of the Contentious Electoral Tribunal (TCE), Patricio Baca. He was to set up a session of the organisms one day later to settle the conflict in “Alianza País” about which is the legally recognized leadership. The Correistas expected Baca to rule in their favor and, in this way, the decisions taken at the convention convened for December 3 in Esmeraldas are mandatory. But with the recusal, the meeting will not have the recognition of the CNE. When all that happened, Rafael Correa was in Manabí, trying to regroup his bases.

3.- CNN reminded him of his treatment towards the press

Rafael Correa gave an interview to CNN in Spanish. On November 28, he had an acid meeting with the journalist Fernando del Rincón, who reminded him of the attacks on freedom of expression and the press that existed in his government. It was after Correa condemned a supposed censorship of the media against him, after his arrival in Ecuador. Rincon also haunted him on his political responsibility in the corruption events that are investigated around the Odebrecht case contracts as well as the re-elected vice president Jorge Glas, who faces a trial.

One of the objectives of the arrival of Correa was to press politically to stop the popular consultation of Lenin Moreno. The two judges of the Constitutional Court in charge of analyzing the seven questions were Tatiana Ordeñana, former member of the Participation Council, nominated by Correa, and Marien Segura, who also arrived at the Court by nomination of the former president.

On November 29 Lenin Moreno argued that the Court did not transact the process within the established term and asked the National Electoral Council to call the consultation. Correa described as “coup d’état” the decision of the current president, but in networks decree 946 was published, which he signed on November 28, 2011, when the Constitutional Court did not rule on the consultation in La Concordia and he decided to send directly the consultation to the CNE.

Thus, the expectation of the “Alianza Pais” faction that waited for the non-qualification of the questions that were key for them, such as the one referring to the indefinite re-election of candidates and the one of surplus value, in the Court, was truncated. Correa said there has been a “constitutional break” before international media. (I)

Cybermonday was extended for two days and exceeded expectations