Banana Cluster begins, within the country, search for tolerable varieties to Fusarium race 4

The efforts of the Ecuadorian banana sector, through the Banana Cluster,to find a variety of bananas resistant or at least tolerant to Fusarium race 4 are not only focused on the international arena in search of the import of plant material, but also within the country. 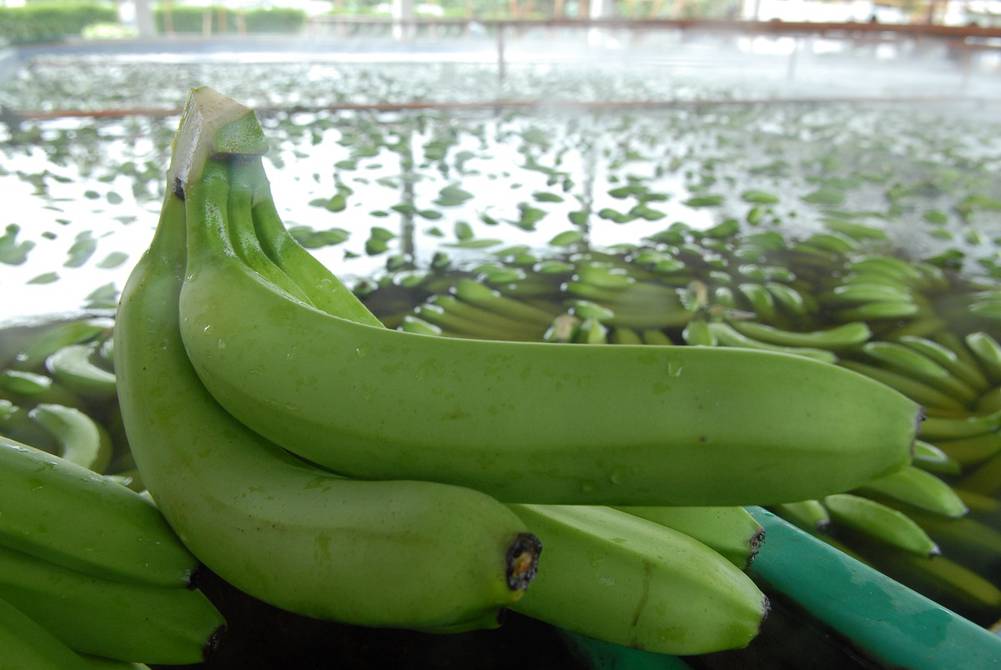 The Cavendish banana variety is threatened by the Fusarium Race 4. The national banana sector and the government are looking for alternatives with the importation of tolerant varieties such as Fomosana and Gal from Israel.

The search for these varieties outside and inside the country is against the clock, as the pest was already detected in Colombia, in August 2019, and in Peru last April. The Cluster is composed of the Banana Marketing and Export Association (Acorbanec), the Association of Banana Exporters of Ecuador (AEBE), the Regional Banana Corporation of Ecuador (Agroban) and the Chamber of Agriculture of the Second Zone.

Juan José Pons, coordinator of the Cluster,revealed that they are developing a project with the Center for Biotechnological Research of Ecuador (CIBE),of the Polytechnic School of the Littoral (Espol) for research and development with national varieties.

Pons assured that $1.5 million will be invested in the project that would have results in six years; although on the current state of this he mentioned: “We are in the phase of studying the terms of reference.”

What is in progress is the approval process for the import of plant material of the Formosan or 218varieties; and Gal,two clones developed by the company Rahan Meristem, from Israel,that the firms Cormael, Jasafrut, Palmar and Asoagribal,members representing the Cluster in the province of El Oro, seek to bring to the country.

This, once the Agency for Regulation and Control of Plant and Animal Health (Agrocalidad) showed last May 12 the “Protocol for import of plant material for propagation of musaceae for research purposes”, so that natural or legal persons can bring to the country varieties tolerant to the pest.

However, from Agrocalidad, in charge of approving the import, and the Cluster there are contradictions regarding the current state of this process.

Pons indicated last Wednesday that in the case of the Gal variety, the banana producers of El Oro, who constitute the cluster’s working group in that province, presented all the required information.

“We are requesting an urgent resolution to import the material,” said the cluster coordinator.

However, Monica Gallo, coordinator of Plant Health of Agrocalidad,confirmed, last Thursday, that the agency received part of the information provided by the company of Israel and the Cluster, which was reviewed, but returned to the guild to be completed.

“Once all the information is available, it will be possible to continue with the negotiation process for the establishment of the research protocol in the country together with iniap (National Institute of Agricultural Research),” Gallo said.

Meanwhile, Pons added that the process to import a tolerant variety from Taiwan, by the government through iniap, is also delayed.

“In the case of the Taiwan Research Center, the protocols and agreements between Iniap and them are also very delayed. Greater agility is required on the part of Agrocalidad and Iniap to conclude these processes, “concluded the leader.

Regarding the Taiwan material, Gallo indicated that the process has been carried out together with Iniap and the Taiwan Banana Research Institute (TBRI),however, in a last communication received by the Taiwanese authorities, they requested to have the rapprochement with the new government authorities.

“So we are informing our new authorities so that we can hold meetings that will allow us to continue with this negotiation process,” the official explained.

Meanwhile, the Minister of Agriculture and Livestock, Tanlly Vera, met this week with the secretary general of the Andean Community of Nations (CAN), Jorge Hernando Pedraza, to discuss the threat posed by fusarium race 4 to Ecuador, having it just 350 kilometers away, in the department of Piura.

Pedraza, who met with the Banana Cluster on Friday, June 25, in Guayaquil, to address the issue of the pest, confirmed that the bloc is working to implement a Permanent Monitoring and Technical Surveillance Center, which would operate in Lima, to prevent the plague from spreading in the region. (I)