Banana growers ask for the rescue of their sector

Banana growers erected barricades with the fruit to block a highway and ask the government to declare an emergency in this sector. The road that connects Guayaquil with El Oro and Loja woke up with traffic cut off due to the protest of small and medium producers. 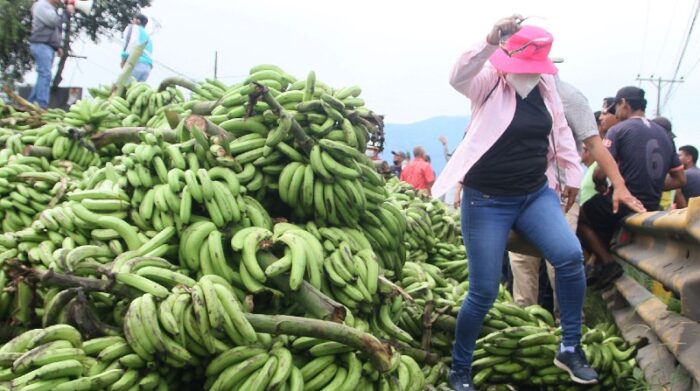 The banana producers blocked the passage on the bridge over the Cañar river, on the Puerto Inca-Guayaquil road.

Vehicular traffic at that point returned to normal after noon on Monday. Banana producers indicated that they will repeat these road closures in El Oro, Los Ríos, Guayas and Manabí.

This was the beginning of the banana strike that will continue until the government provides solutions to the problems that have been exacerbated by the war in Ukraine. The sector had been avoiding obstacles such as the high cost of maritime transport and the threat of contagion from the fungus Fusarium R4T, which destroys crops and is present in Colombia and Peru.

Added to this was the fall in the Russian and Ukrainian markets since the start of the conflict on February 24. 25% of the Ecuadorian banana production was sent to these two countries. Faced with the closure of the Ukrainian ports and the drop in Russian demand, Ecuador is having difficulty selling 1,800,000 boxes of bananas per week.

Reduced demand in Eurasia puts 50,000 direct jobs and up to 250,000 indirect jobs at imminent risk . The banana activity is the main creator of jobs in the Ecuadorian countryside.

One of the main points of the struggle of the producers is that the support price of the 18-kilo box of bananas be respected. The Ministry of Agriculture and Livestock set it at USD 6.25 for the period between January 1 and December 31, 2022.

But, given the fall in international demand , some players in the industry pay less to receive the fruit . The support price seeks to guarantee coverage of production costs.

The Minister of Agriculture, Pedro Álava, and Julio José Prado of Foreign Trade are scheduled to meet with the players in the banana industry to find out their points of view. “The President of the Republic has the principle of open doors”, Álava recalled when making the invitation to the meeting.

The banana growers indicated that they will put on the highways about 10,000 bunches of bananas per day, which will be given away to the people, in order to curb the oversupply and defend the price of the fruit. This measure is independent of the results of the dialogue with government representatives.

The reduction of the international market and the possibility of job losses are not the only ghosts that worry the banana sector. The rise in maritime transport, the few quotas in containers and the rise in the price of fertilizers are additional issues that plague the sector.

Due to the closure of the Ukrainian ports , which are taken over by the Russian military, the Black Sea route is restricted. Meanwhile, most cargo ships are waiting in European ports to find expedited routes to reach Russia.

Due to these complications, some 450,000 boxes of Ecuadorian bananas had to be diverted from their destination, which was Russia. This product could be placed on the Mediterranean coast at a lower price and with the permanent risk of oversupplying a market and affecting prices.

The route to Saint Petersburg, the main Russian port , is congested . According to Ecuadorian exporters, priority is given to shipments that carry food or perishable foods, but it is not enough.

But if shipping products has become complicated, importing from Russia is much more. With the economic blockade, many banks have stopped operating, which makes it difficult to pay for imported or exported goods.
Russia is Ecuador’s main supplier of fertilizers, which have raised their prices in recent days. But in addition to this, it is one of the main suppliers of chemical and petrochemical products, which are used by other countries to manufacture more specific fertilizers or agrochemical products.

Faced with the rise in fertilizers and agrochemical products, producers ask for government intervention. They point out that an inspection or price table for these products would help curb price escalation.

China could be a market that helps the banana sector