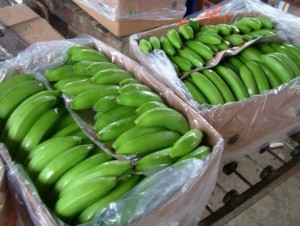 Ecuador can export more bananas, “but for this is urgent that the fruit is competitive in foreign markets,” Eduardo Ledesma, director of the Association of Banana Exporters of Ecuador (AEBE), told to Daily Expreso. Gustavo Marun, president of the Regional Corporation of Banana Growers (Agroban) agree with that.

Taxes, the threat of El Niño and wage increases rise banana prices for producers who sell to exporters who sell abroad. And at the end of the chain, the Ecuadorian banana becomes more expensive than the competing countries.

But the two extremes of the banana industry do not agree at all. Producers, according Marun, demand that the official price set each year by the Government is respected. According to their complaint, a (unofficial) spot price coexists, which makes difficult the conditions of the producers. “In a 70% of Ecuadorian sales the spot price is negotiated,” says the representative of banana farmers.

The box of bananas can not be maintained at the same price the whole year because market conditions prevent it. Between January and April, the fruit price rose, but from March to October, coinciding with the fruit season of consuming countries, demand for Ecuadorian bananas fell and thereby the prices.
Source: http://expreso.ec/expreso/plantillas/nota.aspx?idart=8671395&idcat=38269&tipo=2

$ 880 million will be allocated for social gaps

The exchange stamp, another restriction