Banana producers arrived on the morning of this Friday the 22nd to the lowlands of the Zonal Government, in Guayaquil, to carry out a peaceful sit-in and demand that the price of the box of bananas that will govern by 2022 rises to $ 7.50, $ 1.25 more than the minimum price of Current Support (PMS) which is $ 6.25. 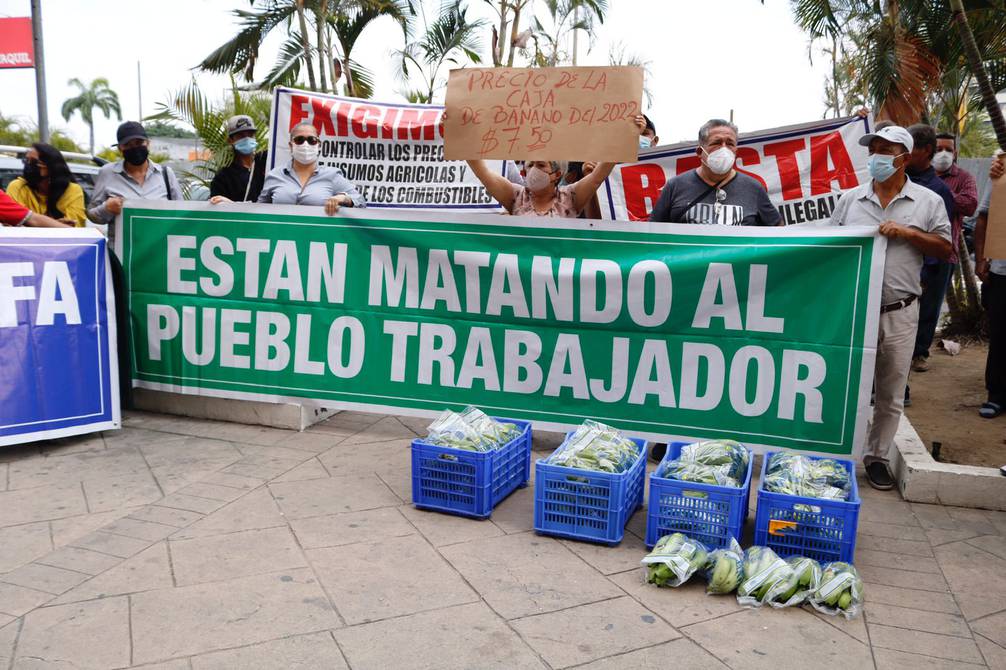 Producers stood this Friday in the lower floor of the Zonal Government to demand that the price of the banana box rises to $ 7.50.

The demonstration takes place within the framework of the negotiating table meeting to set that price, which takes place at the Musáceas Strengthening Undersecretariat from 10:00.

The producer sector came to the negotiating table with the proposal that the price rise to $ 7.50, while the export sector seeks to keep the price at $ 6.25 with the argument of maintaining competitiveness in international markets.

Franklin Torres, president of the National Federation of Banana Producers of Ecuador (Fenabe), indicated that the proposal of the sector is carried out in accordance with what is determined by the current Banana Law, in which it is mentioned that the PSM is based on a study of production costs and a reasonable profit.

He added that to establish the national average a banana plantation of 50 hectares (ha) is considered, with a production of 2,000 boxes per hectare, which corresponds to a medium producer.

Torres assured that the PSM must be respected, as he assured that in recent weeks, they have an average of $ 4.25 per box, which he described as an attack on the producers.

Meanwhile, José Antonio Hidalgo, executive director of the Association of Banana Exporters of Ecuador (AEBE), indicated that the price of international fruit is set by the supermarkets of the destination countries, which have already stated, in some cases, that it is impossible for them to increase the prices of sale to the consumer considering that they are just beginning to observe a recovery in consumption.

“For this reason, it is essential for the sustainability of the industry to maintain the minimum price of support at $ 6.25,” the leader said this week.

During the meeting, which is still ongoing, Richard Salazar, executive director of the Banana Marketing and Export Association (Acorbanec), pointed out that “we always aspire to be paid the best possible price, but obviously we are not alone, and this is an issue competitiveness”.

For his part, Torres announced that the producer sector will continue with peaceful plantings as long as there is social injustice. “As long as there is no social justice, there will be no peace in the country … the only way to have justice is by paying just enough to the small and medium producer,” said the President of Fenabe. (I)

Isspol: US court asks to retain assets of Chérrez and Luzuriaga valued at $ 176 million