Bananas have lost strength in Europe and the US. in the last 6 years 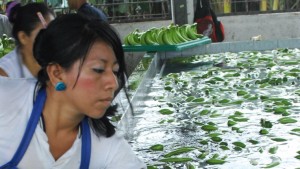 The regime change in banana imports of the European Union ended as expected by El Oro banana growers in the late 90s: with a significant loss of the highest price market in the world.

The Banana Growers Association of El Oro defended the regime based on quotas and licenses, against the current one, of tariffs, which has made Ecuador lower the 40.7% stake it had in 2010 to 30.4 in 2015. During that time sales fell from 108 million boxes to 96.4 million boxes.

The Ecuadorian fruit also lost ground in the US, where it has managed just a 15.12% share against 21.17% it had until 2010, according to statistics from the Association of Banana Exporters (AEBE), although in the last three years it has succeeded in recovering.

In the Middle East, however, it achieved a significant increase of its presence in the mentioned period, from 2.63% to 12.16%. Russia remains stable.