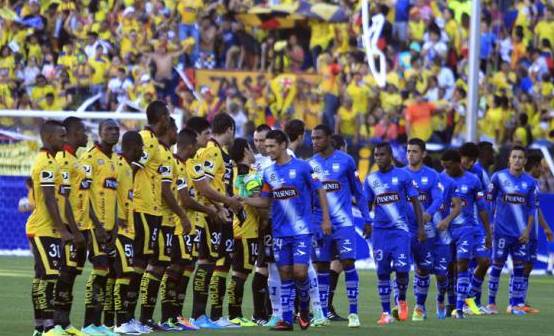 Barcelona won 0-1 against Universidad Catolica and managed to win the second stage of the national football championship with which it will define the 2014 championship title against Emelec in a historic edition of “Clasico del Astillero.”

Matías Oyola made a corner kick in the 15th minute of the first half and player Pedro Velasco score with a head shot the only goal for the Barcelona team.

Barcelona fans intensely celebrated the end of the match played in the Atahualpa Stadium in Quito after obtaining the victory that will allow them to play the final match against Emelec.

This is the first time the two most popular clubs in the country will define the Ecuadorian championship final round.

The “Clasico del Astillero,” by the way, will be on Wednesday, December 17 at the Monumental Stadium (20h00) and Emelec will receive the rival team in the second-leg match at the Capwell stadium, on December 21 (time to be defined).

This morning in the auditorium of the Guayas Association, it was confirmed that there will not be visitor fans in the final matches of the Ecuadorian football tournament between Barcelona and Emelec.