Barrera, former mayor of Quito, leaves politics for a while 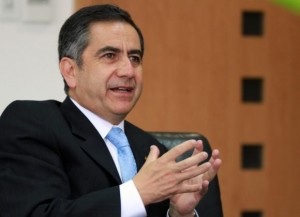 Augusto Barrera, left today the Mayoralty of Quito he led the last five years. The former Mayor will not be present in the appointment of his successor, Mauricio Rodas, this Wednesday.

Today he plans his last activity as Mayor. He will visit the North Metro station, one of the insigne projects of his administration .

He also assured that he will take time off and travel to Europe, where he provides to fix some academic pending issues. “Right now I have two intentions: to relax and resolve academic issues, since I need to check some documents of my PhD in Spain. From that I will estructure my reintegration into academic life ,” he said .

Barrera, a medical graduate and specialized in local development and political science, shall return to work after vacations, because the wage settlement he will receive can only afford him “one month.”

However, his long-term political future is a question, as there are three options to be considered: a ministry, an embassy or the active membership in the Alianza PAÍS movement .

The name of Barrera has sounded in two ministries with commissioned holders: Tourism and Economic and Social Inclusion .