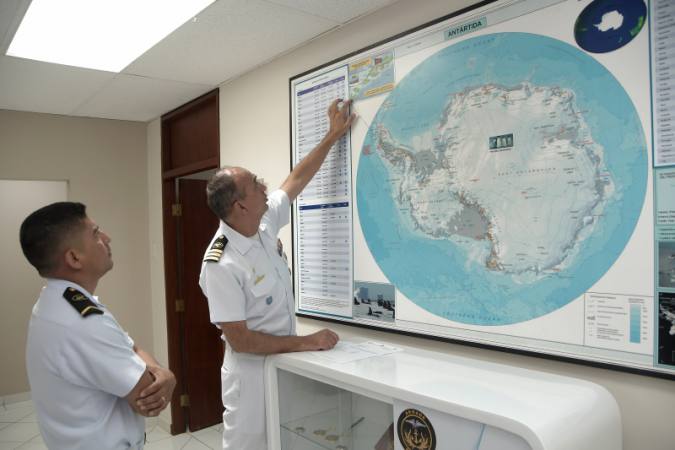 Eighteen marine members of the expeditionary group in charge of the Ecuadorian Antarctic Institute coexisted the austral summer in the midst of the changing climate of Antarctica. There they maintained and expanded the Ecuadorian Pedro Vicente Maldonado station on Greenwich Island.

This station received an expeditionary group from Ecuador. This year it was fulfilled with tour 22.

The group was composed of 32 people that were completed with public servants and researchers.

This expedition started in January and culminated this month brought advances in science -with thirteen projects- and was also accompanied by these tasks of maintenance and expansion of the station that was made depending on the climate.

Upon arrival at the station, the group was responsible for cleaning and maintenance of heating equipment, electrical system and water in order to allow room habitability.

Ecuador, being a consultative country of the integrated Antarctic Treaty, has a vote in future decisions on that area, cited Julio Ortiz, head of the trip.

“When the country took position in the Galapagos, it did not measure what it had there, what is it now that the islands have? It is exactly the same. That is why we must be there (in Antarctica) permanently, “he said about the importance of these journeys to Ecuador.

Following that plan, one of the groups was responsible for the growth of the site that is projected to operate permanently in the long term, Ortiz said.

Bases and metal structures were assembled from a fifth module that will serve as a control station. This material was taken by sea to Chile and then to that place. In 2019 it would culminate. Their works were concentrated taking advantage of the days of good weather, since in some occasions it was prevented by winds or snowfalls.

So far, the Ecuadorian site in Antarctica has four room modules, meeting rooms, laboratories and generators and the wastewater plant.

The current control station works in a space of the four existing modules, the future module will give more space to the control of generators, firefighting equipment, communications.

Hólguer Martínez, expeditionary, said that the water system is connected with hoses when arriving and on its return it is disconnected to the flow of glaciers. (I)

They asked to occupy land in Durán for the Airway station