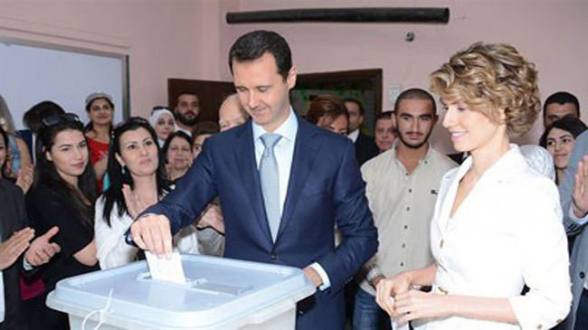 Bashar al-Assad voted along with his wife, Asma.

On Tuesday, the Syrian regime held a presidential election won in advance by the candidate and current president Bashar al-Assad, while the opposition denounced the electoral process as a “farce” that, according to experts, will prolong the devastating civil war that has ravashed the country for three years.

More than 15 million Syrians were called to the polls. Assad, 48, who has repeatedly stressed his intention to crush the rebels, or so-called by him “terrorists”, voted along with his wife Asma in downtown Damascus according to photographs published on state television.

Meanwhile the U.S. government denounced al-Assad’s attempt of forcing his authority by organizing a “shameful” presidential election amid a brutal civil war. “Assad has no more credibility today than he had yesterday,” said State Department spokesman Marie Harf.

The Assad clan has ruled Syria for over 40 years.