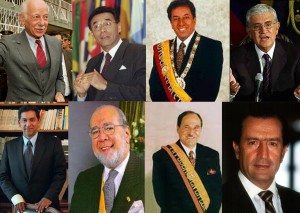 The draft amendment to the Law on Public Service that includes limiting the lifetime pensions to former presidents of Ecuador was submitted by the First Vice President of the National Assembly Rosana Alvarado, and backed by eleven Assemblymembers of ALIANZA PAÍS, the same that comprises three items.

Under this proposal, former presidents who are under certain categories such as judicial proceedings related to the exercise of their duties, or who did not complete their term by dismissal or abandonment of office will not receive this compensation that was established in 1955 by executive order and cosists of $ 4,700 per month.

Those who were ‘removed’ from the presidential chair due to physical or mental disability declaration, or revocation of their mandate will join this group. But also, there are those whose appointment has been a direct consequence of a rupture of the democratic regime, says the proposal.

Former presidents who did not complete their term due to these causes, breached their “highest duty of service to society, because it shows the lack of legitimacy with their constituents,” states the text.

Instructional for TBC use allows collections with payrolls