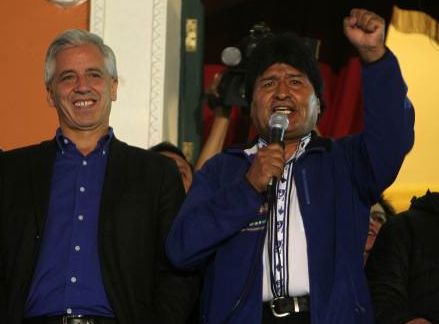 The president of Bolivia, Evo Morales, was proclaimed winner of this sunday elections after exit polls gave him a sweeping victory for a third term.

The candidate of the Movimiento al Socialismo (MAS), would have achieved between 59.5% and 61% of the vote, which would serve to validate the two-thirds in the Assembly, crucial to have the complete control in decision making.

After the first results, Morales went to the balcony of the Presidential Palace, in the Plaza de Murillo, to thank his followers the new electoral triumph.

Morales, accompanied by the Vice President Alvaro Garcia Linera, said: “This is the feeling of liberation of our people. How long will we remain subjected to the empire or the capitalist system? This victory belongs to the anti-imperialists and anti-colonialists.”

He also urged the opposition to “work together” for Bolivia. “Let´s do not make confrontation,” he said. Morales will become the longest serving president (14 years) that would have been in power in the Bolivian democracy.