Border controls intensified and Colombia is asked for more patrol 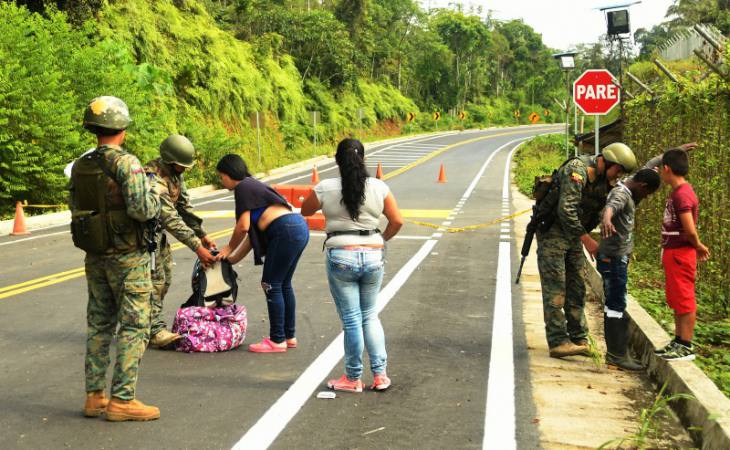 In San Lorenzo, north of Esmeraldas, there is only talk of the homemade bomb tank that exploded last Tuesday morning, killing three soldiers and wounding eleven others (one even cut off his legs). The Marines went from Mataje Pueblo Nuevo to Mataje Viejo, in a control patrol.

Martha Q., while sweeping the sidewalk in front of her shop, told her neighbor Laura C. that if the death of the military came, it is not far that “those people” – referring to those who attacked the military patrol – seek to do damage to civilians. Both believe that if this problem is not rooted, “the bad guys will not” have limits.

The women stopped their conversation when they saw that ten agents of the Police Intervention and Rescue Group (GIR) left to make a security inspection in the building of the Judicial Multicompetent Unit of San Lorenzo. Shortly before, with anti-explosive dogs, the offices of the local municipality were also reviewed.

Agents from other special intelligence units of the Police formed near the port to delineate tasks of the day, while a military helicopter flew over the area. Military on board of trucks crossed the city and community police personnel gave rounds on foot and in patrol cars.

“One does not know if it is good or bad that there are so many police and military in the area,” said Leo Rodriguez, reflecting on the attacks since January 27 that have occurred against police or military objectives on the northern border.

Since Tuesday, the day of the attack, the entrance to Mataje is restricted for those who arrive by the main road and are strangers to the area. Yesterday, a checkpoint with armed Marines informed of the prohibition and immediately registered the cars and the cargo that is carried.

The names of those who arrive to that site are recorded in a logbook, so do not go beyond the checkpoint. Those who can enter and leave, under strong control of identities and the burden they carry, are the residents of Mataje and Puerto Colombia (on the other side of the Mataje River, in Colombian territory). One of the agents participating in the control operation explained that all are checked, because “they cannot trust anyone”.

The requested documents were validated by the uniformed people by means of questions to their bearers, photos of the documents were taken and they were registered in the military log.

The Venezuelan Eluz Díaz and the Colombian Ruth Salinas, along with their 8-year-old son, were part of the people who crossed the control of the navy, after walking about 20 minutes because there are no cars entering Mataje, they pointed. Their documents and their suitcases were reviewed by the military and they did not object, because they were clear of the state of emergency that was lived in this part of the Ecuadorian territory. (I)