The announcement came amid stringent biosecurity measures motivated by the COVID-2019 health emergency in Ecuador.

According to the court made up of judges Iván León, Iván Saquicela and Marco Rodríguez, it was verified that the illegal contributions made by state contractors to the electoral campaigns of Alianza PAIS 2012-2016, were reported at the highest hierarchical level , that was to former President Rafael Correa and former Vice President Jorge Glas . 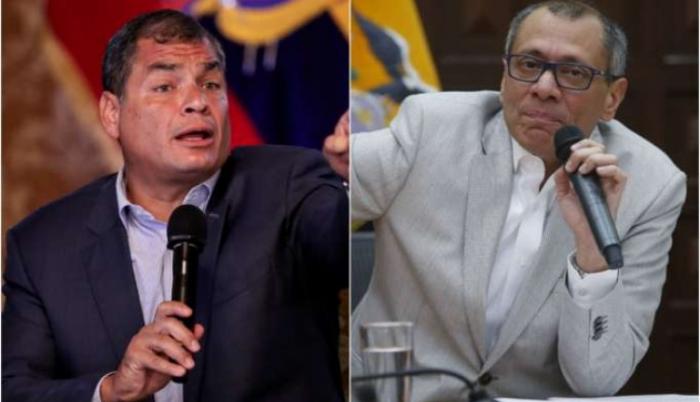 It was the conclusion of the court that tried the Sobornos case. Both were convicted as mediate authors .

The same penalty was received by former Minister of Public Works María de los Ángeles Duarte who was considered a co-author because everything was under her control and while she was a minister she received illicit payments.

She, according to the judges, had full knowledge and control of the actions to be undertaken with the companies.

The former Legal Secretary of the Presidency, Alexis Mera was also named as a co-author. The judges recalled that they said they knew that the businessman Pedro Verduga gave money only to Pamela Martínez , trying to disclaim his responsibility.

The court recalled that at the trial the Prosecutor’s Office proved that he received more than $ 300,000. His former adviser Pedro Espinoza acknowledged in the trial that he removed envelopes from the office of Pamela Martínez, former adviser to Rafael Correa, and handed them to him.

Former Senagua secretary Wálter Solís was also convicted as a co-author. According to the court, the evidence showed that he was a contract executor and was part of the alleged structure. The businessman Verduga assured in the trial that he asked for a million dollars . He was considered a co-author.

Christian Viteri was singled out as a co-author. The judges confirmed that Viteri supported Viviana Bonilla’s campaign and that she received $ 100,000 in funding.

Assemblywoman Bonilla, according to the judges, when she was a candidate, received sums of money, she was not interested in where the resources came from. The facts refer to the fact that she is a beneficiary of money, it is not relevant that she has collected the money.

Vinicio Alvarado benefited from the bribes through his Creacional company. He is also a co-author, according to the judges. The sentence imposed on Pamela Martínez, former adviser to Correa, is 38 months, while her former assistant Laura Terán received 19 months.

The employers accused in the case were also found guilty as perpetrators of the crime.

They also lose political rights, and they are sentenced to pay damages, and as integral reparation, the placement of a plaque in the Presidency of the Republic Building , apologizing publicly.