Rafael Correa was sentenced for leading the corruption network that between 2012 and 2016 received ” undue contributions ” at the Carondelet Palace to finance his political movement in exchange for awarding state contracts to businessmen . The Criminal Court of the National Court of Justice Ecuador imposed an 8-year prison sentence for bribery on Tuesday, April 7, 2019, in the case of Bribes 2012-2016 . 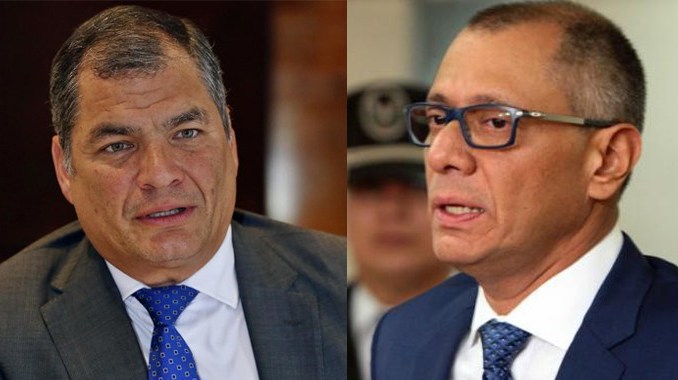 Since 10:00, on three floors of the Court building, north of Quito , the diligence was carried out electronically , due to the social distancing and quarantine measures that are in force in Ecuador due to the health emergency to try to contain the spread of the covid-19.

The national judge Iván León (rapporteur) revealed, before reading the sentence, that the Court considers that the crime is proven , that the Prosecutor’s Office demonstrated the existence of a corruption structure and that the victim of the crime is the State .

The Court, made up of Iván León , Iván Saquicela and Marco Rodríguez , verified that the payments made were reported at “a higher hierarchical level”, that is to say to the then President Rafael Correa (2007-2017) and to the former Vice President Jorge Glas , the judge pointed out. National speaker, from the Courtroom on the eighth floor of the Court, where – in addition to the Court – were the representatives of the Prosecutor’s Office , the Attorney General’s Office and part of the defense of the accused. Most of the accused and their attorneys were distributed in suitable rooms on two other floors of the building; all connected virtually.

The state attorney general, Diana Salazar , promoted the investigations. The now sentenced, he said, were part of a network that received illegal contributions from state contractors to finance the Alliance Country campaigns and other political events . The investigations showed that the money was delivered in cash or through the crossing of bills .

The Court, emphasized Judge León, determined after 32 days of analyzing evidence that former President Rafael Correa knew of the ” improper contributions ” to his political movement, through his presidential advisers at the Carondelet Palace.

Carondelet’s advisers in the years of the crime were Pamela Martínez and Laura Terán . This Tuesday,   Judges León, Saquicela and Rodríguez ordered that both sentences be reduced for the cooperation they gave in the case. Martínez received a 38-month sentence and Terán a 19-month sentence.

The exteriors of the National Court of Justice were guarded by members of the Police. Photo: Diego Pallero / EL COMERCIO

The Comprehensive Organic Criminal Code (art. 280) establishes that the crime of bribery is punishable by imprisonment of up to seven years . According to the attorney general, Diana Salazar , the defendants formed a criminal structure that received millions of dollars in bribes.

On March 6, 2020, the Prosecutor accused ex-president Rafael Correa as a mediated author of this crime and asked the Court for the maximum sentence increased by one third (that was equivalent to nine years and four months ). The same was requested by the Prosecutor’s Office for Glas; for ex-ministers Alexis Mera , María de los Ángeles Duarte, Walter Solís and Vinicio Alvarado ; for former legislator Christian Viteri; for Assemblywoman Viviana Bonilla , and for 10 businessmen . The Court applied an 8-year sentence.

The Prosecutor’s Office did not charge Duarte’s former assistant, Yamil Massuh , because insufficient evidence was found against him.