The military chief of FARC, Luis Suárez a.k.a Jorge Briceño a.k.a Mono Jojoy, perished during a bombing performed by the Colombian Armed Forces. This attack hit the heart of FARC and is the hardest blow in all the history of the terrorist group. 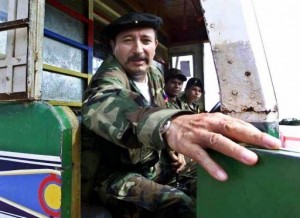 Briceño was 57 years old when the bombing ended his life as the Secretary of Central Command. He had this position since 1993 and directed the Eastern bloc, where he handled most of the economic resources of the group. Ministry of Defense, Rodrigo Rivera informed that his corpse was found yesterday morning after the bombing and the crossfire between soldiers and terrorists.

Jojoy’s hideout was one the biggest settlements of FARC, with 300 metres of length, it had a bunker of concrete, ditches and escape tunnels where almost a thousand guerrilla soldiers were hiding.

Rivera informed that around 800 soldiers from all the military factions of the Colombian army participated on the Operation, which was called Sodoma. The Armed Forces consisted on 60 aircrafts and more than 50 bombs, including smart bombs. During the crossfire 20 FARC guerrilla died and 5 military soldiers were wounded. According to authorities they are out of danger.

Mono Jojoy had 62 warrants for homicide, kidnap and terrorism. In the United States he was wanted for drug traffic and the kidnap of three north American citizens that were released during Operation jaque on July 2 of 2008 along with the ex presidential candidate Ingrid Betancourt.

Yesterday the Ministry of Defense asked the maximum chief of FARC, Alfonso Cano to surrender himself, in return he will live and be treated fairly on trial.

The death of Briceño has lowered the FARC morale and many guerrilla soldiers are deserting. President Santos scored a victory with the fall of the Commander. The FARC has 46 years of armed attacks against the Colombian State.

Chaos in French Transportation Systems Due To Union Strikes