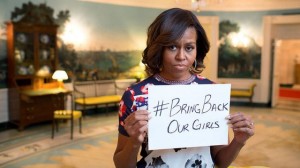 Several personalities from entertainment and politics have joined this campaign, like the First Lady of the United States, Michelle Obama

With the hashtag # BringBackOurGirls, thousands of people, including celebrities have called attention through social networks to raise awareness about the abduction of over 200 Nigerian students Islamist group of Boko Haram.

Haditha Bala Usman, a Nigerian who created the movement said about it: `I ​​was worried about our silence over this terrible attack,´ on the little attention given to the event at first. `This campaign really exceeded our expectations. We are in a time that Nigerians need to know they can use social media,´ she said.