An analysis of the Central Bank reflects displeasure in three of the four tasks analyzed. Only the construction showed favorable expectations in January.

The Business Confidence Index (ICE) fell from 1,274 points in December to 1,264.6 in January 2018. The variation responds to the negative evolution of three of  four sectors examined (industry, commerce, services and construction).

This is revealed by the Monthly Study of Business Opinion (EMOE), conducted by the Central Bank of Ecuador (BCE) covers 1,000 large companies and was published on February 26.

The ICE gathers the expectations of the businessmen, who are consulted on aspects related to the variation in sales, production, personnel hiring, inventory level, prices of inputs and business perspectives. Industry, commerce and services reported negative variations of 0.9, 21.8 and 15.6 points, respectively. 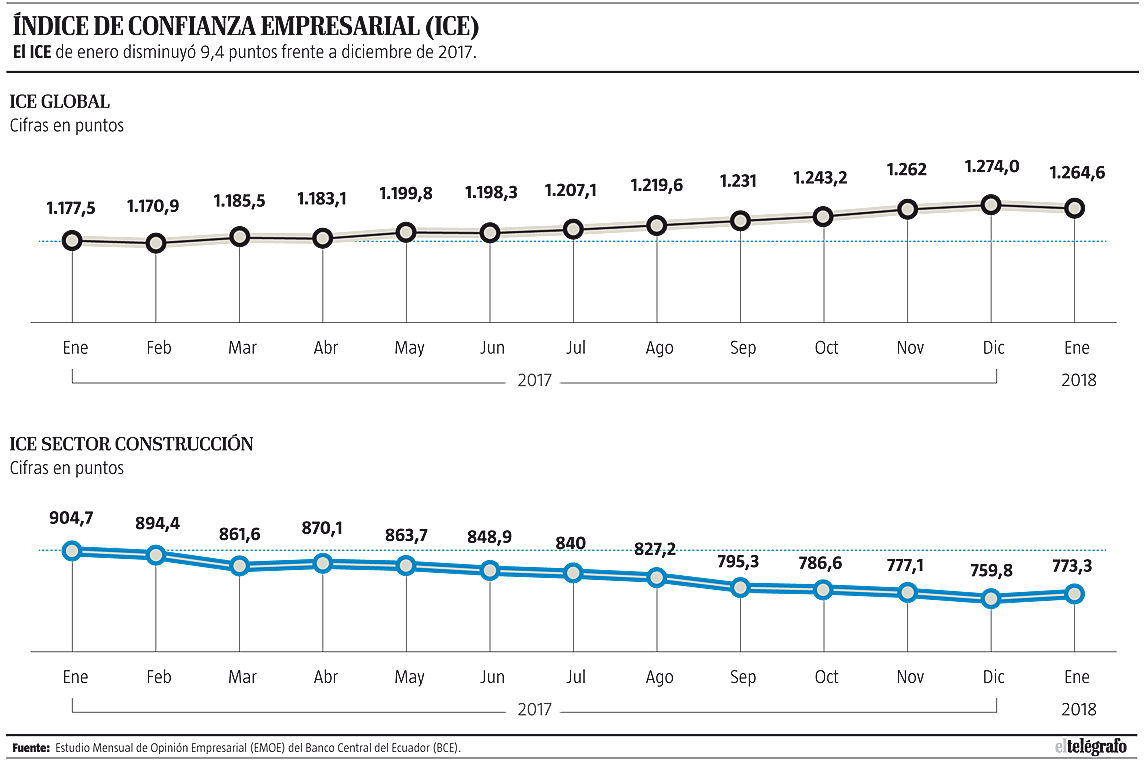 In the case of trade, which had the strongest fall, 246 companies were evaluated. The appreciation of the business is not encouraging, according to the response of the majority, because they mentioned “being worse”, which reflects a balance of -28%, although for February the expectation is positive .

In the opinion of Xavier Patiño, president of the Chamber of Commerce of Cuenca (CCC), the little optimism is partly due to the dissatisfaction generated after the process of dialogue with the Government through the Consultative Productive and Tax Council, as fundamental proposals for the companies were not taken care of in their entirety.

Now, said Patiño, the challenge is to specify policies that make the economy sustainable.

A similar scenario is presented by the industry and services segments. There are more companies that responded negatively in January.

Industries report a slight increase of 0.7% in production volume. In the services area, the total sales value decreased 2.9%.

The construction was the only economic activity that was enthusiastic about the development   in 144 firms surveyed. The ICE expanded 13.5 points more than in December.

The business situation had a balance of 12%. Unlike the other sectors, here were more companies that said they were better. For February it is expected to increase to 14%.

The activity has 27 months of decrease. Today will be held in the National Assembly debate to repeal the Law of Goodwill, a rule that is attributed much of the stagnation of construction. (I)