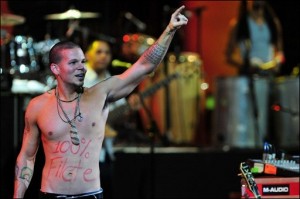 Calle 13 was scheduled to participate in the “Chevron Black Hand” campaign, which complaint to the world of the multinational’s refusal to pay a compensation for the damage caused in the Amazon region

For reasons of affectation in the throat, the Puerto Rican singer René Pérez, better known as Residente, lead singer of Calle 13, can not participate in the campaign `The dirty hand of Chevron ,´ which is organized by the Ecuadorian government against the ravages made ​​by the U.S. multinational.

Today, President Rafael Correa announced on his Twitter account the absence of the artist because of throat ailments and wished him a speedy recovery. Calle 13 was scheduled to share a lunch with youth representatives of different environmental organizations and to visit the Amazon region to “put their hand” in contaminated pools.

`Thanks Rafael, I’m recovering. Once I´m healthy I will be able to go and sing together and support this important project,´was the answer of René Pérez via Twitter.

The Oil Company Chevron was sentenced to pay $ 9.5 billion dollars in 2011 due to environmental damages in the Ecuadorian Amazonia from 1964 to 1999, during period it operated in the country. For that reason the government of Ecuador makes a campaign to expose to the world the negative of the Oil Company to pay the compensation, as it labelled as fraudulent and showy the trial in which it was convicted.

Over 45% of chemical weapons have been confiscated in Syria