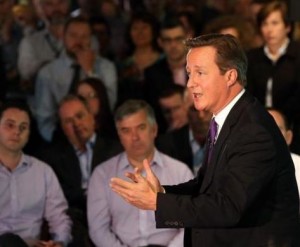 British Prime Minister David Cameron this Wednesday begged the Scots not induce the partition of the UK with the support of the Scottish independence, and warned that a vote in favor of the split will be a “leap into the dark”.

“It would break my heart that this family of nations is divided,” has said from Edinburgh, warning that if there is a split of the country, on September 18th, the separation will be “forever”.

Cameron said that it will be possible to achieve a better future if Scotland remains in the UK.

“The UK is a dear and special country. That is what is at stake. So no one in Scotland has any doubt that we want desperately you to stay, we do not want this family of nations be separated,” added Cameron.

According to a survey published on Sunday by The Sunday Times, supporters of separation would win with a 51% against a 49% of those opposed to secession.