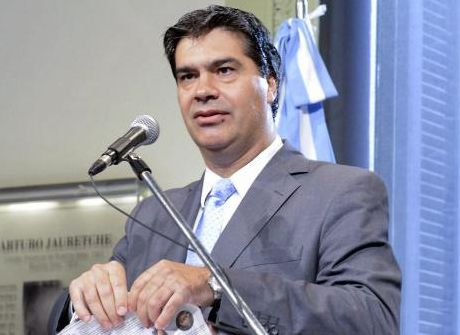 The Argentine Cabinet chief, Jorge Capitanich, on Monday ripped two pages of the newspaper Clarín in a press conference after reporting a “political confrontation” of “opposition media” by a newspaper article about President Cristina Fernández.

Capitanich ripped the pages where Clarín reported the alleged existence of a draft complaint of prosecutor Alberto Nisman, which sought the arrest of Cristina Fernandez for the alleged concealment of Iranians accused of the bombing of the AMIA Jewish Mutual in 1994.

According to Clarín, the draft report, with numerous crossed lines, had been found in a trash of the prosecutor’s house after his death, by a shot in the head last January 18, 2015, and incorporated into the case file.

This information was denied hours later by the trial judge Ariel Lijo, who clarified that the studs were made by the court itself and in Nisman’s complaint “any substantial petition regarding the alleged accused” does not exist.

For its part, the Clarín described the attitude of Capitanich as the crossing of “a new limit of escalating intolerance and aggression against the press, this time with a reprehensible gesture which also entaisl personal risks to the media and the journalists involved.”

The debate on payments for market concentration continues in the Assembly