Commission analyzes the affiliation of sex workers in the Assembly 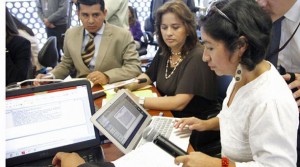 The Commission on the Rights of Workers expects to deliver to the plenary, on March 6, the report for the second debate of the package of labor reforms and the Social Security Law.

For the second debate of the reform package, the commission examines extending the benefit to agricultural workers and sex workers, said Fausto Cayambe, Assemblyman of the Alianza País ruling party and a member of the legislative committee.

Besides incorporating the affiliation of housewives to the Ecuadorian Institute of Social Security (IESS), who will have access to a retirement pension.

The debate will be attended by officials from the Ministries of Social Development, Labour and the Ecuadorian Institute of Social Security (IESS). Between this and next week the reform bill will be also broadcast in Cuenca and Portoviejo.