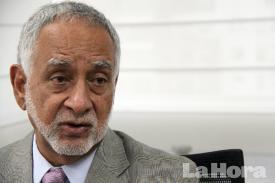 The new Minister of Hydrocarbons faces a series of legal pitfalls and an immense debt left by the previous administration.

Carlos Perez is the new Minister of Hydrocarbons and spoke with daily Expreso to explain how the contracts and conditions former President Rafael Correa left pending will be renegotiated.

– What is the state’s debt to private companies?
– The carrying amount is a little over 2,000 million dollars. We are in the process of talking to them trying to reach payment agreements through Central Bank Securities and a scheme of payments over time.
– Is there a payment agreement with Schlumberger?
– In the coming days, we will sit down to negotiate. Predefined agreements should be finalized in informal talks and be informed to the Ministry of Finance. The balance payable is about 900 million.
– You inherit a state company stained by corruption. How will Petroecuador be purged?
– The president is actively involved in nominating people who will occupy important positions. In the case of Petroecuador, the board will meet in the coming days to select people suitable for the position (general manager). One of its first responsibilities will be to look at any corruption issue that may exist.
– Will you review the contracts signed for the repowering of the Esmeraldas Refinery?
– The previous administration started working on that. We are looking to terminate the contracts. We will work, if possible, through bidding processes.
– What conditions will this tender have?
– For the Intracampos oil block, we have information ready. We must retake that in, I dare say 90 days. The international market showed interest. What we have to see is the modality of the contract. The modality of participation is included and we have to work a little on that fear that made us chose provision of services contracts over participation contracts. I think we have already learned that oil prices are not fixed when signing contracts.
– Will the government make more crude pre-sales?
– It will depend on the budget of the Government. There is the possibility of signing a couple of presales that are pending but I have no instructions to move forward. There are lines of credit open not necessarily with China. There are additional options.

Autonomy, the Achilles heel of the Front of Transparency and Fight against Corruption

Ecuador: no progress in the Odebrecht case