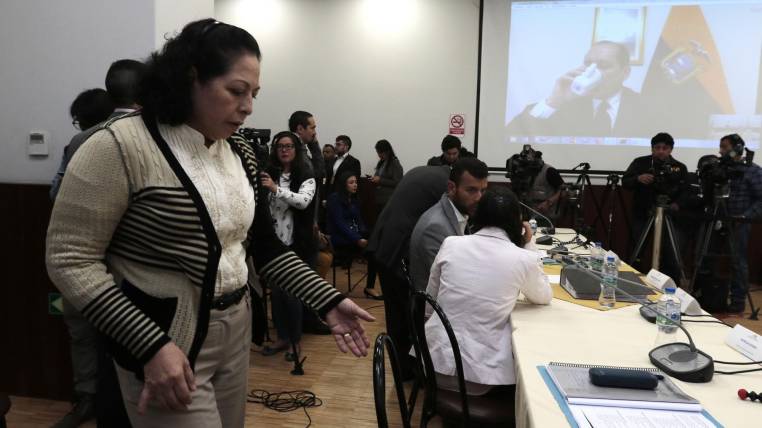 The Assembly Commission that investigates the Gabela case proved it once again: the appearances of the officials involved in the cover-up of the truth in that case do not lead to anything. Yesterday, after hearing new testimonies that only contributed more contradictions, half-truths, silence and selective amnesia, the members of the Commission decided to go on the offensive: they asked the President of the Republic and the Minister of Justice, Rosana Alvarado, to lift the confidentiality that weighs on the case as it should, that is, not on Twitter, as they did the day before, but by means of a presidential decree and a motivated resolution. And they are preparing to bring the expert Roberto Meza and, with him, to reconstruct the report (the third product) that disappeared when he was in the custody of the Ministry of Justice.

Yesterday Carlos Larrea appeared, who was in charge of the Ministry of Defense for 19 days in November 2012 and did not have much to report; and Carina Argüello, ex-sub-secretary of Security and delegate of Interior Minister José Serrano before the Interinstitutional Committee constituted by presidential decree to investigate the case. The testimony of the latter knocked down the bookshelf. Patricia Ochoa, the wife of the murdered General Jorge Gabela, made a joke at the exit: “At least I had to meet with José Serrano before coming here, to agree on what he said”. And yes: between both versions there are so many contradictions that cancel each other out.

Carina Argüello attended the meetings of the Inter-institutional Committee (made up of the Ministries of Justice, Security, Defense, Interior and Transparency) between October 2012 and October 2013. That is, up to three months after the expert Roberto Meza handed them his full report. However, he says he never heard of the third product. And he assures, to whoever wants to believe him, that the information that Meza provided to the Committee until October 2013 spoke of common delinquency. Which is, to say the least, unlikely.

The members of the Commission looked at her with suspicion and were losing patience. They insisted on their questions and she repeated with the same formulas of a script learned by heart. When Sebastián Palacios put forward the record of attendance, signed by her, of a meeting of the Interinstitutional Committee as late as July 2015, stumbled visibly: “I do not remember what was discussed in that meeting,” came to the step.

Nor does Argüello, who is still an official of the Ministry of the Interior, remember what the expert José María Ruiz said in his presence to the widow of Gabela. Patricia Ochoa herself reminded him: “He said that it was enough for him to read five pages of the information that the Interinstitutional Committee handled to realize that it was not a common crime.”

With what the authorities do not remember, a book could be written. Lenin Lara, José Serrano, César Navas … Everyone has forgotten the details. Or they cannot say them because they have already declared in the Office of the Prosecutor and they say they are bound to silence by a secret of summary.

Meanwhile, Ledy Zúñiga, the former Minister of Justice who delivered the severed and retouched report of the expert Meza to the public, remains at a distance from the Commission. “We have invited her three or four times,” staff from the secretariat of the Commission informed this newspaper, “but she says she will come here after declaring in the Office of the Prosecutor.” Obviously, this way he will have a pretext to silence everything he knows. Most of the members of the Commission know it: they are being taken for a ride.

On the trail of the signature

Does the murder of Jorge Gabela have to do with an arms trafficking network? Former Security Minister Homero Arellano dropped that track on Monday and the members of the Commission have decided to investigate it. The company Sumil is mentioned, which negotiated the Dhruv helicopters. Yesterday they asked the former Minister in charge of Defense, Carlos Larrea, who also chaired the Defense Strategic Goods Contracting Committee. He said that something was bought for him. But of course, he does not remember. (I)