Chancellor receives IACHR team for the case of murdered journalists 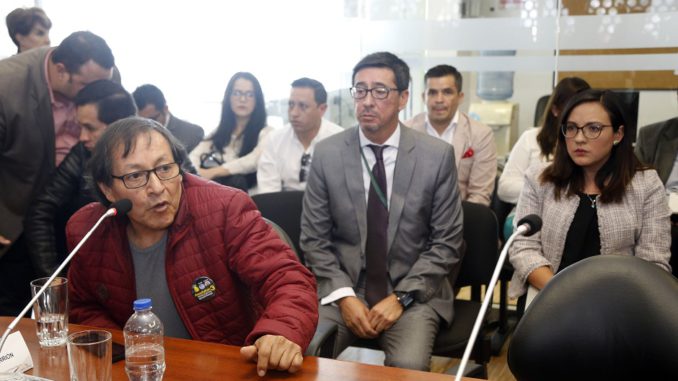 The acting Ecuadorian chancellor, Andrés Terán, today received the special team of the Inter-American Commission on Human Rights (IACHR) that follows up on the case of the press team kidnapped last March at the border and murdered in captivity in Colombia.

The delegation is made up of the Vice-President of the IACHR, Esmeralda Arosemena, the Special Rapporteur for Freedom of Expression of the IACHR, Edison Lanza, and the expert of the precautionary measures team of the IACHR, Luz Adriana Camargo, explained the Foreign Ministry in a release.

The IACHR team, which will be in Ecuador until next Friday, will hold meetings with the families of the victims and with the authorities and institutions in charge of the investigations.

The Ecuadorian government asked the IACHR to set up the Special Monitoring Team (ESE) to continue the work to clarify the “deplorable events that took the life of the journalism team,” the official note says.

The murdered press team was buried on June 29 after their bodies were found in Colombia and subjected to a process of identification with the support of their families.

The journalist Javier Ortega, the photographer Paúl Rivas and the driver Efraín Segarra were kidnapped on March 26 in the Mataje area, in the coastal province of Esmeraldas, on the border with Colombia, where they carried out journalistic work on the rise of violence in the zone.

Shortly thereafter, a dissident faction of the ex-Colombian FARC self-styled “Frente Sinisterra Oliver” assumed responsibility for the kidnapping and on April 13 the Ecuadorian president, Lenin Moreno, confirmed the triple murder.

That group is also credited with the kidnapping and murder of Katty Velasco Pinargote and Oscar Villacís Gómez, an Ecuadorian couple who had traveled to Esmeraldas.

The bodies of the couple were repatriated on July 6 after being identified in Colombia with the help of their relatives and buried two days later in their native province of Santo Domingo de los Tsáchilas. (I)

The second inclusive park of Ecuador will be in Huarcay